First there was that big blue bike on which I could hardly reach the pedals. Once it fell on my six-year old body in the school parking lot and I wondered if I would never get out from under it. Except for that, it gave me a great feeling of freedom and independence. A couple of other bikes came and went as I grew, but the biggest change came when I was 20 with my C. Itoh  that had "World's Finest Precision Instrument" painted right on it—braggadocio for a department store bike. It was my first 10 speed and it was the beginning of riding a lot, or my idea of a lot since I wasn't at all athletic.
Next there were more serious matching bikes for me and Mr. Rududu that he customized to have 15 speeds back when that was a real oddity.  We rode them all the way across the US in 1976 on the Bikecentennial transamerican route, some 4300 miles (6880 km). The same bikes went several times to Europe for all summer bike trips: France, Portugal, France again. Newer bikes that disassemble to go into one suitcase each have been to Italy three times. 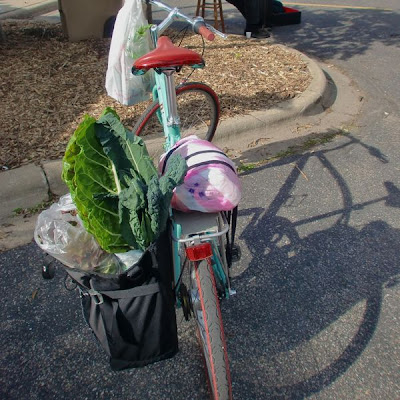 Much as I respect my touring bike, my feeling is profound affection for our around town bikes—matching Bianchi Milanos designed by Sky Yaeger, a friend from art school. They are so cool even little boys are impressed. I love the celeste green and the red saddle, handlebar grips and sidewalls. Madison might not be mountainous but it ain't flat; in response to a serious wimp factor, Mr. Rududu lowered the gearing a bit on the 7 speed internal hub. Every time I go up that hill to the capitol, I'm so glad. The great thing about the Milano is that I love it so much I ride whenever possible: to the store, to the farmers market, to the library. I feel it makes a fashion statement so I like to wear clothes that go with it. Shown are circle socks designed by Anne Campbell. 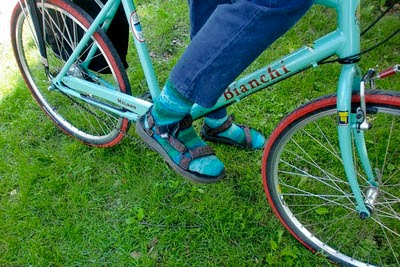 Hi Carol, I'm back and catching up on reading your blog entries. As you know Holland is The Bike Country, but I've never seen such a fashionable bike over here. Love the colours, most of all the red tyres! And a great idea to wear the matching socks.