A quick trip to a museum

I can spend hours at a time in a museum but on a recent trip to Chicago, we arrived at the Art Institute just 45 minutes before closing. The good news? If you get there within an hour of closing, it's only half price. Yet is it worth spending $9 for just a 45 minute visit? I thought so because I had my heart set on seeing a temporary exhibit of a weaving from Madagascar. It is woven of the silk from Golden Orb spiders. 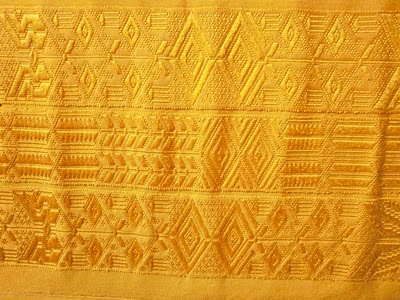 The silk is probably the most beautiful naturally gold-colored fiber in the world. The weaving is made up of millions of strands of spider silk which the artisans extracted from the spiders before releasing them back to the wild. Each plain weave thread is made up of 96 strands of spider silk. The brocade threads that make up the design are 960 strands each. The designs are traditional from the area, but this is the only known textile of its kind. You can find a video about the making of textile here.
I next turned my attention to the rest of the new African gallery. This embroidered raffia weaving from the Kuba area of the Democratic Republic of the Congo is wonderfully abstract and was created in the early 20th century. 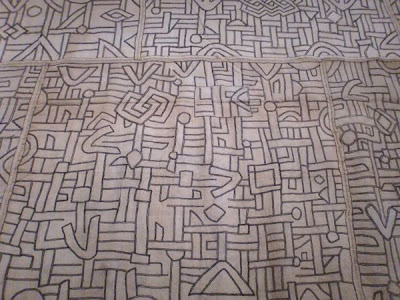 The adjacent gallery has objects from the Americas including some wonderful Peruvian pottery that was hard to photograph. My favorites included a "Bowl depicting a swarm of mice"with a highly organized group of rather cute mice. I also liked the whimsical "Vessel depicting the Assault of Bean Warriors." Who knew that beans wore helmets and carried weapons? Even though my picture didn't come out well enough to post here, I found that the Art Institute has a very nice site for searching their collection and you can see a photo of the bean warriors here. Now that I've discovered how to browse the Art Institute of Chicago's site I'm sure I will devote hours to virtual trips to the museum.
This bannerstone was found in Ohio and was created somewhere between 3,000 and 5,000 years ago. It's a wonderful miniature sculpture that was used to throw spears more efficiently. 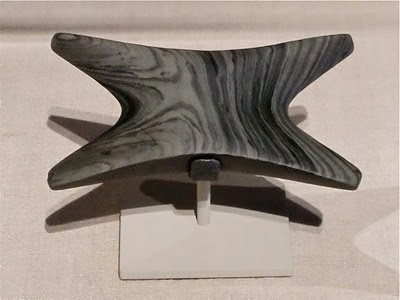 Having such a short time really focused my museum visit. I visited just a few galleries and concentrated on a limited number of pieces. While I prefer longer visits, I highly enjoyed this one. Instead of Carpe diem, my motto for the day was "seize the minute."
Posted by Carolina at 2:02 PM 4 comments:

I've been stitching a series of temari with autumn colors. Here is a temari with some mini pumpkins. The temari is about 3.25"(8 cm) in diameter. I've seen photos of gigantic temari, but I'm not at all ready to do one that is the size of a big pumpkin! 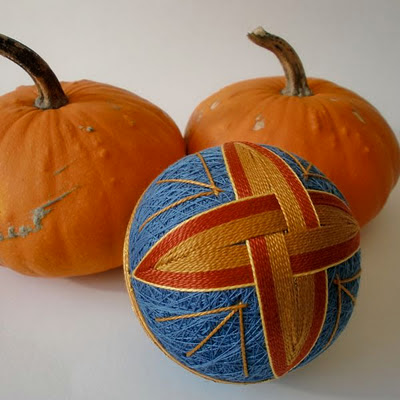 In this series I've been coming to terms with an aversion to tans and browns. They are really quite a nice colors, not bland and boring as I sometimes have thought. I am drawn to tans that have a bit of yellow in them, adding a hint of honey. 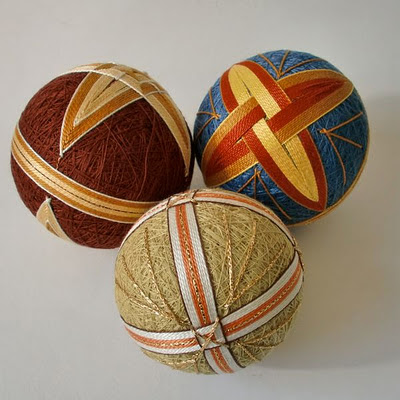 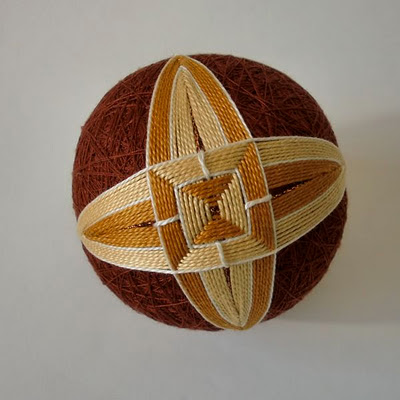 The more I look, the more I realize there are some wild and wonderful color combinations in the autumnal northern woods. I don't know if it will be possible to capture green and red together in a way that is as lovely as on leaves but it is inspiring to think about. 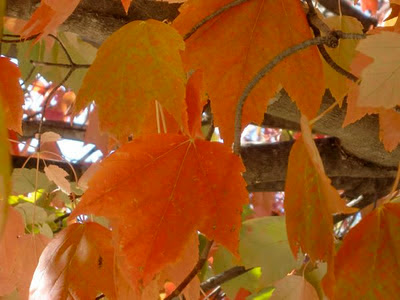 The nitty-gritty: The stitching instructions for these balls can be found in Japanese Temari by Barbara B. Suess. The color choices are mostly my own.
Posted by Carolina at 10:39 AM 2 comments:

Remembrance of falls past

Autumn brings back some of my fondest childhood memories such as the aroma of leaves when kicked. This week is more suited to sitting by the fireplace but last week I was riding a bike through golden coins of leaves. 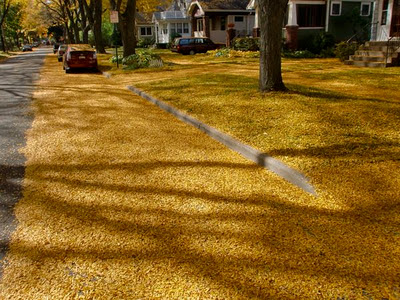 They were so lovely I stopped my bike to kick a little gold. 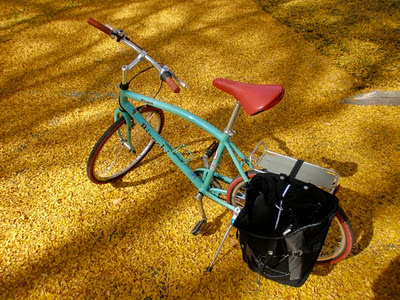 This week is very blustery and the leaves are quickly coming off the trees. Recently it was very still. Autumn is the season of change. 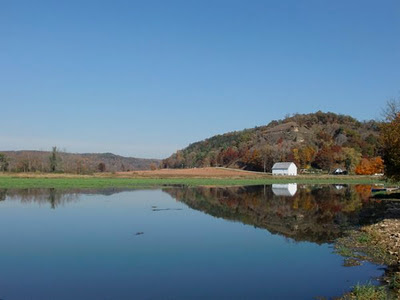 Admiring my favorite socks the other night before I took them off, I was shocked to see the heels were almost worn though. There were no actual breaks in the yarn, but in places it was the thickness of a single hair. Eek! Time for drastic action.
The sock pattern is Pomatomus, a free pattern by Cookie A available from Knitty, an on-line knitting magazine. If you like to knit and don't know about Knitty, check it out immediately as it's a treasure trove. 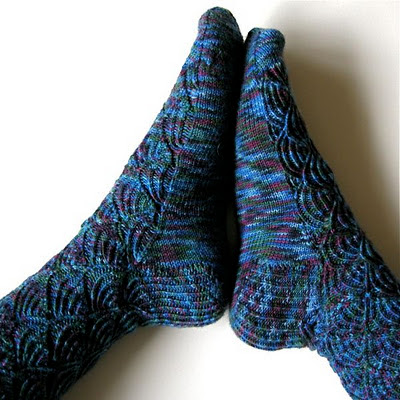 This is one of the most popular sock patterns on Ravelry and thousands have knit it. It's the only sock pattern I've done so far that I plan to do again in a different color. Meanwhile I want to get some more use of this pair and even have some of the same yarn in my stash so I resolved to repair them.
My mom used to darn socks—not because we were poor but because she grew up in the Great Depression and that's what people did. To darn you need only some yarn, a blunt needle and something round to put inside the sock, called the darning egg. Mom used a light bulb as her darning egg and stitched back and forth across the hole, then wove over and under those threads.
Because I noticed before there was an actual hole, I was able to use duplicate stitch on the existing stitches, trying to follow the trajectory of the original yarn. I'm not great to duplicate stitching and it gets very confusing in a hurry as the new fat yarn obscures what one is trying to do. In spite of wandering from the true path many times, my patches look quite acceptable and I think they will be functional.
I used a cuckoo call as my darning egg. I don't actually call cuckoos, but I bought this because I thought it was beautiful. I actually use it to let Mr. Rududu know when dinner is ready. I'm not saying he's a cuckoo... 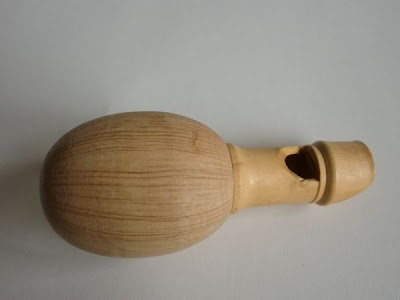 I found a really good explanation of how to mend a sock with duplicate stitch even if there is a hole here. 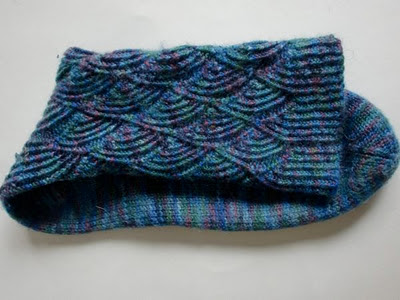 The nitty gritty: Pomatomus uses a lace pattern, but I found the large holes I got when I knit it as written distracting. To reduce their size, I knit through the back on all stitches after a yarn over. (ie sittiches that were marked on the pattern as a purl after a yo became knit through the back stitches.) I knit these in Plymouth Yarn Happy Feet.

I love it when I discover something wonderful in an unexpected place. I didn't expect to find a world class Japanese garden in the relatively small city of Rockford, Illinois which has a population of 152,871 according to the 2010 census. Plus Rockford has been going through some tough times in the last few decades. An article in Wikipedia states:

"Starting as early as the 1990s Rockford has had the ignominious honor of being listed at times as one of America's worst cities by the Rand Mcnally corporation and Money magazine, sometimes being ranked one of the top ten worst cities. This may have been due to the lack of jobs and high number of outdated or closed factories."

So I was surprised and delighted on a visit last week to Anderson Japanese Gardens in Rockford. 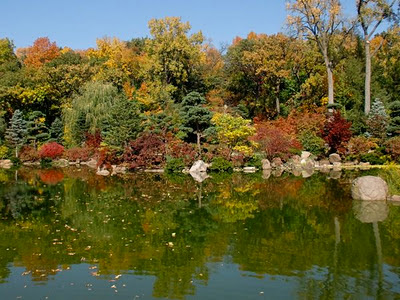 Having been there, I'm not surprised that the Journal of Japanese Gardening that has named them the finest Japanese garden in North America. We visited during fall colors and enjoyed seeing the hill behind the garden in glorious bright colors. The garden is in the style of a 13th century pond strolling garden. There's plenty of room to stroll as the gardens cover 14 acres (5.7 hectares).
The garden features several waterfalls, two large ponds, and a small river. There are plenty of koi in the ponds to add to the water viewing pleasure. 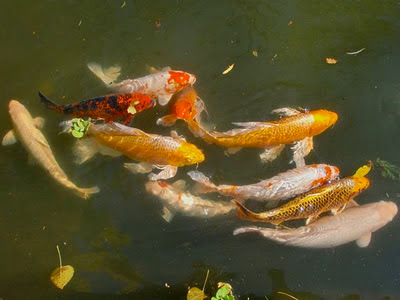 Even some of the gravel reminded us of water. 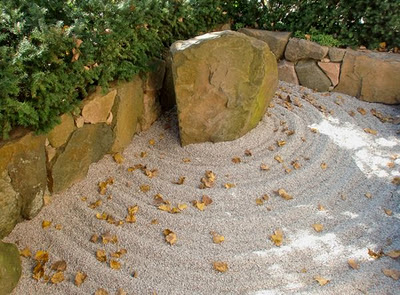 If you are in the Midwest and a fan of gardens, I highly recommend going to Rockford.