Among the many organisms growing on cloud forest trees are a multitude of fungi and lichens. They can make very beautiful abstract designs. 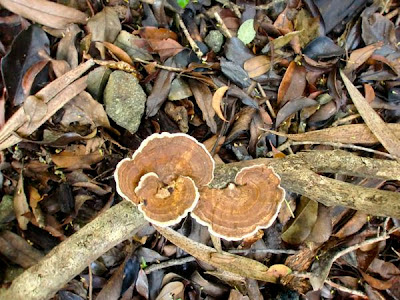 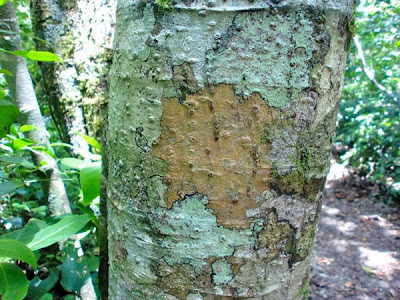 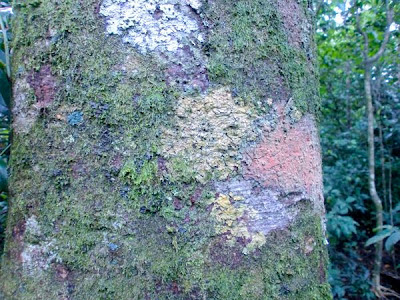 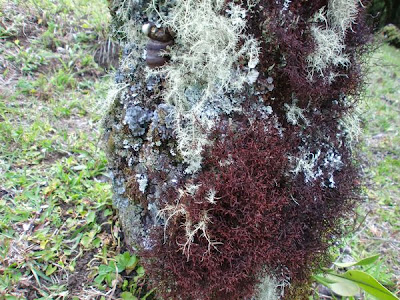 Posted by Carolina at 5:30 PM No comments:

Using self-striping yarn always reminds me of how I adored yarn that changed color when I was about eight. I hope I never totally grow up if it means I have to get too sophisticated for this kind of yarn. One of its advantages is that just plain knitting can be rather interesting but not require much attention. I often knit my socks during Scrabble games when I'm waiting for my turn. (How much knitting I get done depends on who I'm playing with but it does keep me from going nuts during slow games. ) 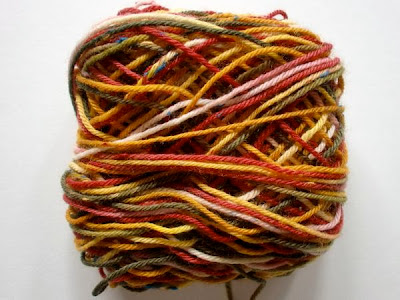 I recently knit some socks from some vintage yarn I got at a de-stashing event and I don't know what the brand is. I thought the yarn was ugly in the ball, but when I knit it up I really liked the socks. Moral of the story: it's just really hard to tell what self-striping yarn will look like when knit.  Oddly, the stripes stacked up much wider on one of the socks than the other.
I was also pleasantly surprised by this Zino  by Plymouth Yarn in colorway 2. On the ball band the tiny picture can't show the lovely subtlety of the colors. So far it's not looking nearly as stripey as I expected. By the way, the photo shows the sock and yarn in a stainless steel bowl. I like to use a bowl to keep the ball from rolling around on the floor. During the dry season in Monteverde things can get quite dusty. 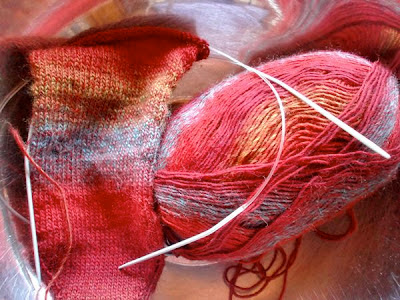 Much more elaborate are the stripes in my current Fair Isle project, a cardigan sweater. I wonder if everyone puts markers between their repeats in a Fair Isle project. By making sure the marker is in the same place of each pattern as you go around, you can notice mistakes right away. I just use loops I've made out of string as my markers. On the left you can see a steek; I mark each side of a steek. They might not coincide with a pattern repeat but it's important to know where to start and end them. This is definitely not knitting to be done while playing Scrabble. 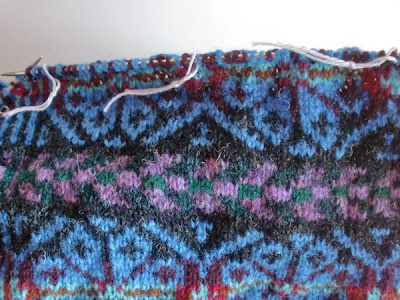 Posted by Carolina at 3:56 PM No comments:

As we approach the beginning of the rainy season, many birds in the Monteverde area are starting their nesting. Finding good real estate is not easy in Monteverde, even for birds. Cavity dwelling birds need a large tree with a rotten center that they can excavate. We recently saw this Resplendent Quetzal working on this nest hole. 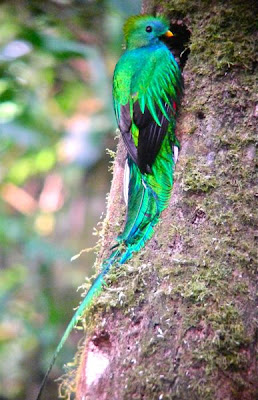 Here's a picture taken a few years ago of a Quetzal emerging from his nest hole. 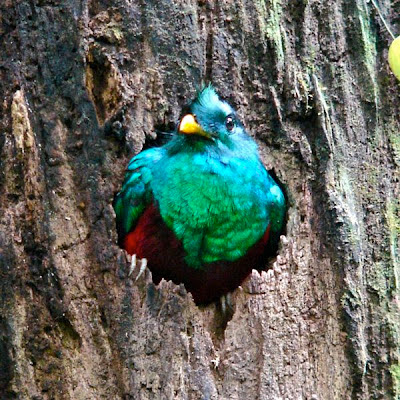 Both parents of this species work on the nest, incubate the eggs and feed the chicks. The Monteverde Cloud Forest Reserve and others provide artificial nest boxes that are sometimes used by Quetzals. The nest boxes are filled with wood chips so the birds can "excavate" them.
In San Luis we recently saw a female Masked Tityra working on a nest in a dead snag as the male perched nearby.
For the last several years we've seen several species nesting or attempting to nest in the same trunk. The top of this tree broke off this season and its potential as a nest site must be almost over as it continues to rot away.
Of course most birds don't want their nest location known and the cunning little nests of hummingbirds are particularly hard to find.  Besides being small they look like a little ball of moss, just another of many epiphytes growing on most cloud forest trees and plants. By the way, any hummingbird sitting on a nest is a female as the males don't contribute anything to the nesting effort. This is a female Purple-throated Mountain Gem.
Other birds also camouflage their nests, such as this Slaty-backed Nightengale Thrush, a cloud forest bird that is difficult to see but whose beautiful song is frequently heard. 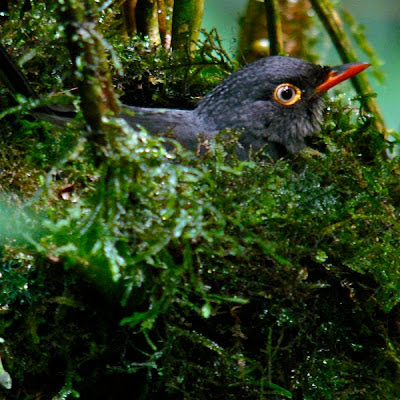 Birds generally will sit very tight on their nest without moving in the hopes of not revealing their location.  Too much disturbance by curious people is very stressful for birds and could result in them abandoning a nest. The photos in this post were taken through a telescope so as to not disturb the birds.
Even the ubiquitous Clay-colored Robin has a beautifully hidden nest. 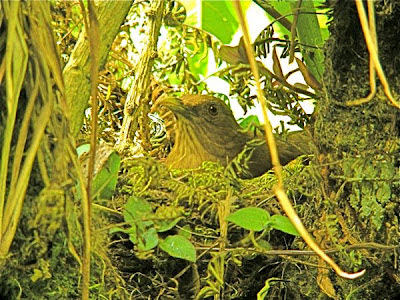 Finding nests is a challenge—Mr. Rududu is very pleased if he gets a few good nest photos in a year.

Yep, it was once again time for us to leave Costa Rica to get a new tourist visa on re-entry. This was our third trip to Nicaragua in eleven years and it has really grown on me as a destination. This trip we went with a couple of Costa Rican friends on their very first trip out of their country. It was fascinating to see their reactions, which boiled down to:
1) This is really different from Costa Rica and has some really great things to see.
2) Prices are really low.
I agree with that and would add that Nicaraguan food is very tasty.
Because we liked it so much last year, we returned to the Island of Ometepe and to El Encanto.  This small hotel has excellent food and is a relaxing spot for hanging out. One of our activities was a nice walk along the nearby Santa Domingo beach near sunset.
After two nights on Ometepe we went back to the mainland and proceeded towards Granada. We paid our taxi driver a bit extra to take us on a little tour along the way. We visited San Juan de Oriente, one of the Pueblos Blancos famous for handicrafts. At the Cooperativo Quetzalcóatl we picked up a couple of beautiful ceramic pots for shockingly little money and had a nice chat with the artist that was tending the store that day.
Next stop was in Catarina to see the Laguna de Apoyo, a beautiful lake in the crater of a volcano. For a small tip we listened to some terrific marimba and guitar music. The marimba de arco is a local version of the instrument that is extremely portable. The arc makes it easy to carry and the player sits on the arc to play, eliminating the need for legs. A marimba expert informs me that they use a similar version of the instrument in West Africa.
Nearby is Masaya, famous for its huge handicraft market. Unlike Costa Rica where many of the souvenirs sold to tourists are actually from Guatemala, there is a wealth of beautiful local handicrafts to choose from. If you get tired of looking at those, there is a very impressive fruit stand with massive papayas.
Our tico friends were particularly impressed with Granada, which is a lovely colonial city with many churches and a fine central plaza. I knew from our first trip to Granada that it's very hot, so I was pleased to have AC in our room. We stayed at a sweet new hotel with just six rooms called Hotel Casa Barcelona. Thanks to our friends, we spent a lot of time exploring the fascinating local markets. Juan got his sandals repaired at an on-street shoe repair shop that doubled as a bike parking lot. 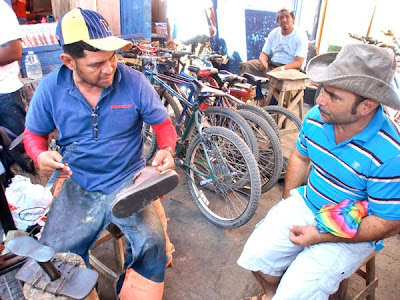 Also at the market, I paid a few cents to be weighed on a bathroom scale a guy was carrying around.
While touring the churches we saw this funeral procession. (I held my camera down by my waist to be discreet in taking this photo.) A local resident told me that this is a standard hearse. 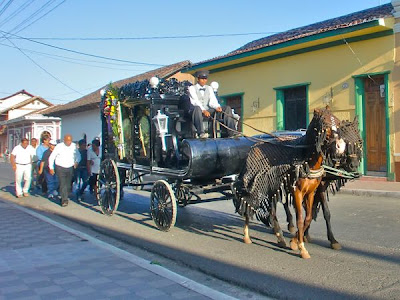 When we tired of being tourists we took a  coche for the living back to our hotel. 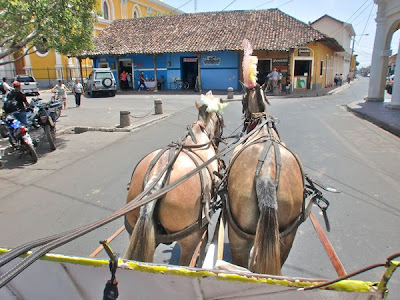 The nitty gritty:
We just found out that it's a myth that one needs to be out of Costa Rica for 72 hours to get a new visa. (That's only necessary if one has imported duty free goods into the country.) There are plenty of interesting things to do in Nicaragua but it felt nice knowing we were spending several days of our own free will.
We took a Quality Transfers shuttle from Monteverde to the border at Peñas Blancas and then a private taxi onward. Since I blogged about the border last year they have been improving the immigration offices on both sides. Things seem to be moving more efficiently and even right before Semana Santa when everyone in Central America is on the move we made our crossing in about 40 minutes each way. Long distance buses now have an employee handle all the passports for their passengers. We were lucky and didn't get behind long lines of people who arrived on local buses. It seems that early afternoon is a very good time to go through. The restaurant is closed for remodeling, but fortunately we didn't arrive hungry. Important: have your airline ticket with you to prove you have a way out of Costa Rica within 90 days. If not, you may need to buy a bus ticket you will never use.
Posted by Carolina at 11:38 AM No comments: