I usually don't go on a spree of stitching multiple temari balls using the same stitch right after each other, but I just finished a series of four balls. They all used the flax leaf stitch. Maybe that's because I think it looks cool and refreshing and the weather has been anything but. 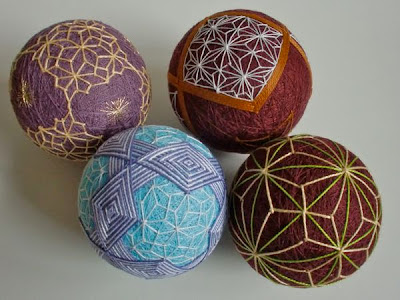 I learned how to do this stitch from Barbara Suess's fantastic new book Temari Techniques. 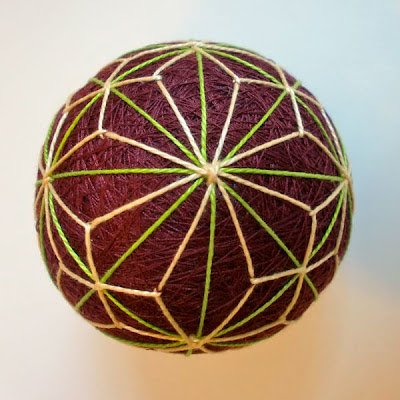 Next I stitched a ball that is my first original design. I filled a couple of areas with smaller versions of the flax leaf. Small flax leaves can be used to fill many different shapes and most of it is by eye without any measuring. That makes it very relaxing. 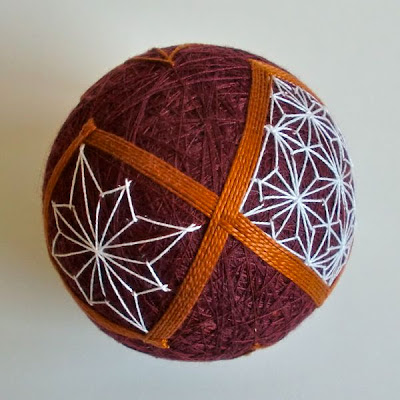 Finally, I did a couple of balls that were based on instructions in a book I have from Japan called Cosmo 4 (Atarashii Temari by Chiyoko Ozaki). This was the first time that I followed instructions from a book all in Japanese, using the diagrams. Being able to do so will open up all kinds of possibilities. Fortunately I had help from Barb's book to learn the flax stitch and the mitsubishi stitch, shown on the right. 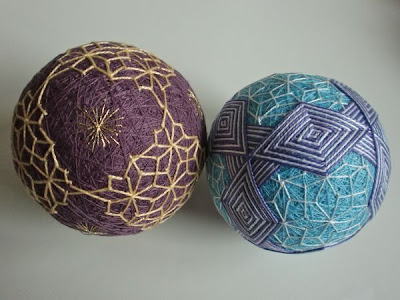 Email ThisBlogThis!Share to TwitterShare to FacebookShare to Pinterest
Labels: temari

A man named Todd Bol in the small town of Hudson in northern Wisconsin had a great idea in the fall of 2009—to put a small book exchange in his front yard to honor the memory of his mother. Since then, little free libraries have been spreading all over the U.S. and to several continents. There are many in Wisconsin, and an amazing concentration in my neighborhood on the near east side of Madison. We are quite literary—and it seems we like to share our love of books. 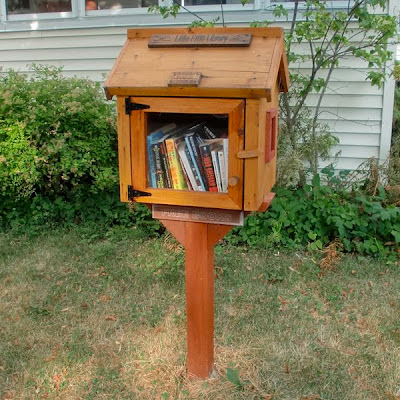 There is an organization to encourage the proliferation of these free libraries. Their web site has lots of information including building plans and suggestions. (Remember that libraries must keep out the rain and snow to protect their books.) Libraries can be registered and appear on a map so people in search of libraries can find them. I'm guessing that Madison with about 60 registered little libraries—and probably some freelance ones—is one of the country's leaders in this movement. 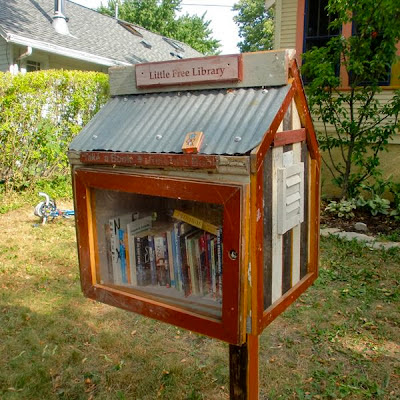 The other morning a friend and I took a few books with us and spent a pleasant hour cycling around our neighborhood looking for free libraries. We found ten. They are all cute and each unique. Many are made with recycled materials. I found some good books to trade for. 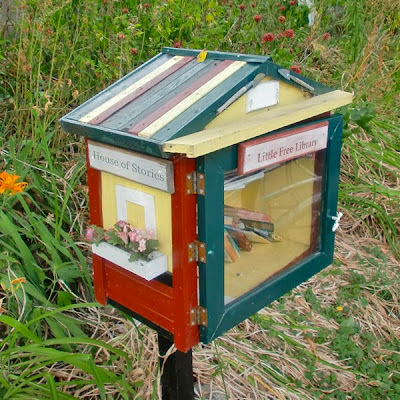 Most little libraries are in people's front yards but we also found one next to a community center, and a couple at businesses. Anyone who wants to found a little free library can do so. 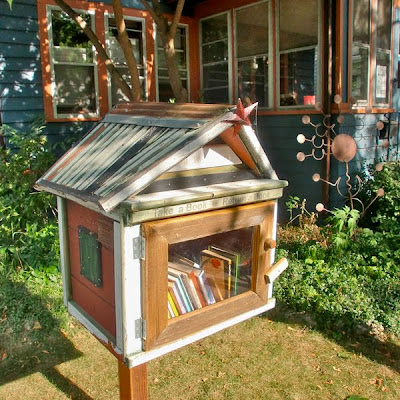 Librarians everywhere, I salute you!

Email ThisBlogThis!Share to TwitterShare to FacebookShare to Pinterest
Labels: Madison

We just had a week of record high temperatures in Madison. (And no, I'm not used to this from living in Costa Rica because we live in the cool mountains there.) Our drought continues, but this week the temperatures have moderated a bit from unbearably hot to just plain hot. Even with grass and plants drying up, there were welcome signs of life. In a tree branch extending over Lake Monona, an Eastern Kingbird pair raised and fledged their chicks. Some mornings I managed to get out and check them before the heat got too much for me. There were three hungry chicks. Kingbirds are flycatchers and the parents brought a variety of damsel flies and other insects. Both parents were in constant attendance. 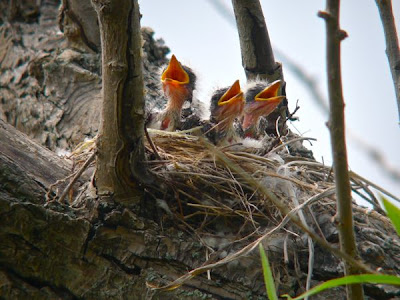 Since the nest was without any shade, sometimes one of the parent birds would sit over the chicks with wings slightly extended to provide shade. 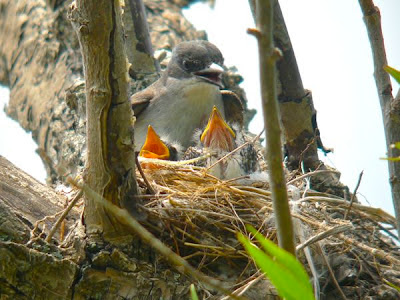 Then it was off to catch more insects.
Posted by Carolina at 3:09 PM 1 comment:

Mr. Rududu just folded a really cute rat. OK, I will admit that even though I used to have a pet white rat, I don't think of rats as generally attractive. But this model, designed by the great French origami artist, Eric Joisel has tons of cute factor. 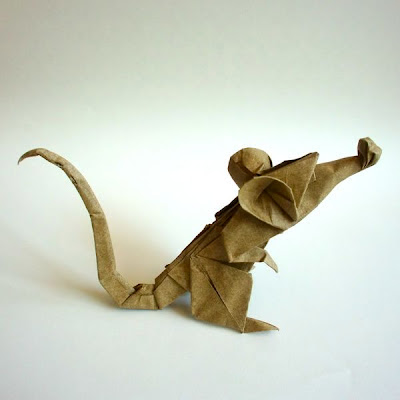 Even minor changes can change the rat's personality. Here I pressed on the rat's head to make him look meaner by changing the angle of the forehead by a very small amount.
I think that this rat's winsome appearance reflects Mr. Rududu's personality.
Monsieur Joisel died at the age of 53 of lung cancer. Tributes included a lengthy obituary in the New York Times which included instructions for folding his rat and it's interesting to see the many versions that people have folded. Most of his models were far more complex. Joisel's pieces were exhibited at the Louvre and he was featured in the 2009 documentary Between the Folds. Anyone with any interest in origami—or if you want to completely change your idea of what origami is—should visit his web site.
The knitty-gritty: This model was wet folded with a paper called Elephant Hide.
Posted by Carolina at 2:43 PM 2 comments: