During the dry season in Monteverde, I've stitched quite a few temari. Now "winter" or the rainy season is upon us, so on this sunny morning I  gathered up this season's crop for a group photo. 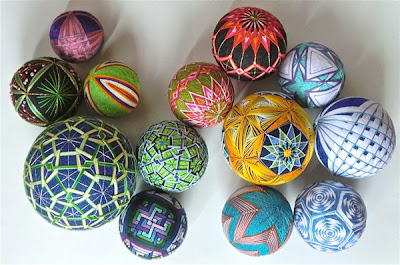 I've been learning more about reading patterns and learning some new techniques. 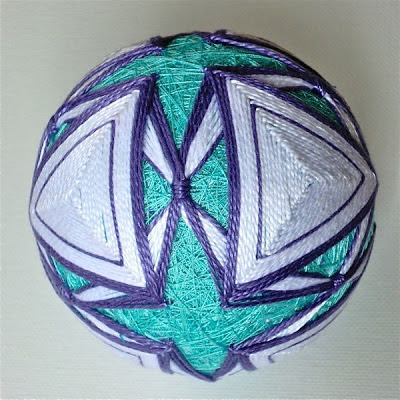 The temari above and the following one use continuous paths for part of their stitching. Learning how to read diagrams for these paths has been a bit mind-bending, especially as I found a small error in the Japanese book I used to learn the one above. The yellow flowers with French knots convinced me that I want to do more free embroidery in the future. 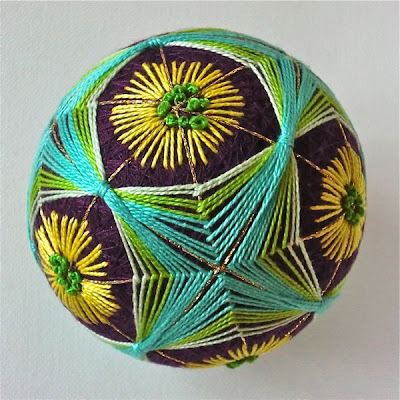 I love the way this large quilt style ball came out. It's not what I thought I was going to get but sometimes there are surprises because as you wrap you cover up things. This is the first time I've let the ball itself show through windows of the wrapped threads. There are many possibilities to explore in this style. 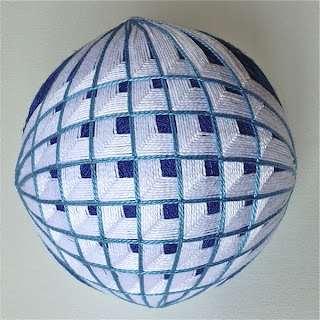 I wanted to try putting some beads on temari, so I tried that on this really little one. I think it's an embellishment that has a lot to offer. I think I'll soon have a bead stash as well as a thread stash. 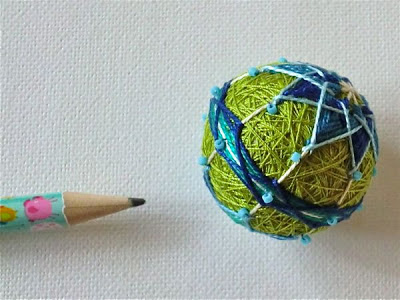 One of my personal guidelines is that if I finish a project that has been subject to procrastination, I give myself extra points. I'm not sure what these points are good for but it's a lot more fun than beating myself up for taking so long. I just finished a Fair Isle sweater that I started a 17 months ago. I hereby give myself lots of points! 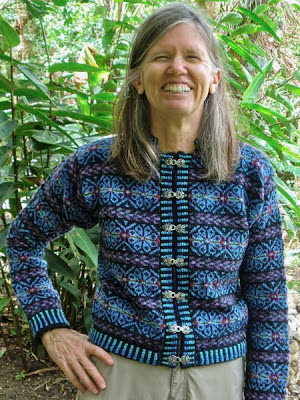 The pattern is my own. I first tried out the colors and flower pattern on a tam. I love trying to mix in a few surprise colors like the rust and a bright dark pink. I prefer shading effects in the two color ribbing. 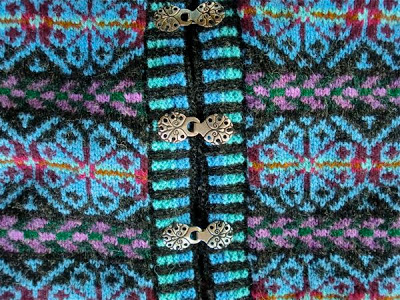 I decided to make the sweater as a rather fitted cropped jacket. This is the first Fair Isle sweater in which I have I shaped the arm holes so the sweater is a bit sleeker. 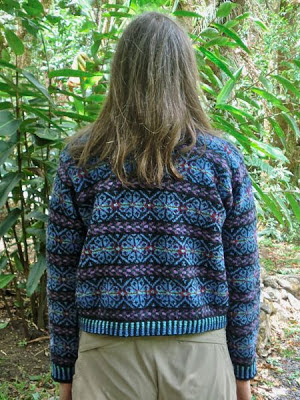 The knitty gritty: The yarn is Jamieson and Smith two ply jumper weight knit on 2.5 mm needles (US 1.5). To figure out the armhole shaping I referred to Alice Starmore's Book of Fair Isle Knitting and found a sweater using about the same number of stitches as I needed. The body was knit with steeks for the armholes and the front. After knitting the body and cutting the steeks, I picked up stitches around the arm hole for the sleeves and knit down until the sleeves were long enough for me. The front bands and cuffs were knit on 1.75 mm/US 00 needles and have facing knit on size 1.5mm/US000 needles. Maybe that's why the closer I got to the end of the sweater, the slower it seemed to go.
Posted by Carolina at 10:36 AM 4 comments:

A small selection of insects

I find insects quite fascinating. That's a good thing for anyone that lives in the tropics because there are a lot of insects about. (I had less positive feelings about the scorpion in our bathroom last night, but that's a different story.) On a recent walk in the Santa Elena reserve, we saw several particularly interesting insects. First was this pair of dung beetles rolling their ball of dung along the forest floor. They were in the cleared area next to the path, heading for a dead end with a 10 cm/4 inch cliff looming ahead so I used a leaf to transfer them over to the leaf litter farther from the trail. 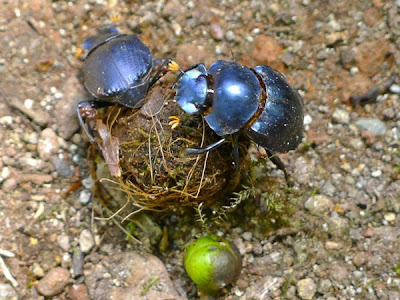 Then we saw this very large insect trucking along at a phenomenal rate of speed. A friend who knows about such things said it is a species of cerambycidae or long horned beetle. Note for future reference: beetles with long antennae are likely to be cerambycidae. This one was over 10 cm. or 4 inches long. 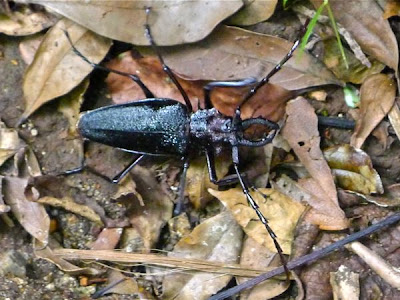 Morpho butterflies are quite easy to see in many places in Costa Rica including Monteverde. Their iridescent blueness and their crazy flight pattern never ceases to lift my heart. It's quite unusual to see one perched with it's wings open. Usually you see the camouflaged under wing. 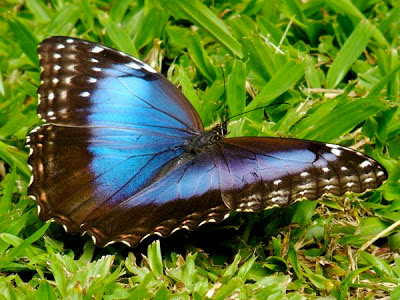 Moths, on the other hand, are often sitting around waiting to be photographed during the day while they sleep. I like this subtle elegance of this fuzzy individual. 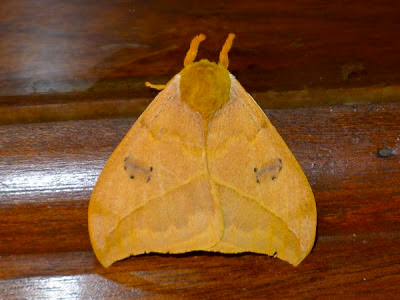 I wish I had some fabric printed with this this motif of  spots within circles. 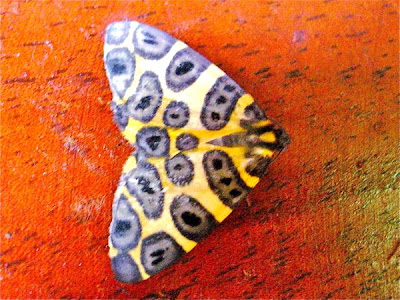 The best thing about looking for insects in the tropics is that you never know what you will see next because there are so many different species.

Posted by Carolina at 5:13 PM No comments:

Two variations on a theme

My most recent temari combine the threads I bought in Guatemala with colors ideas I got there. This ball is sitting on the table runner (a former huipil or traditional blouse) that inspired it. 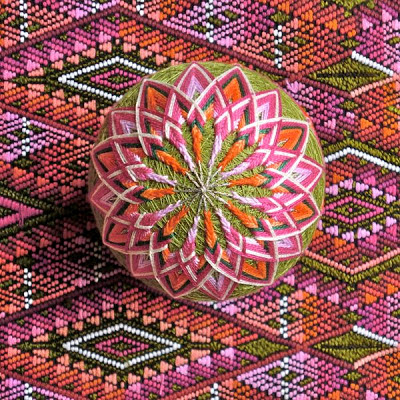 The stitch is kiku or chrysanthemum stitch. It's a great stitch because it's much easier to do than it looks. This thread, being size 8, is finer than what is often used for temari and while it took longer to stitch, it let me get more detail on the ball. It's like having a higher resolution TV. Having done this ball on a green base, I decided to use the same colors on a black base. 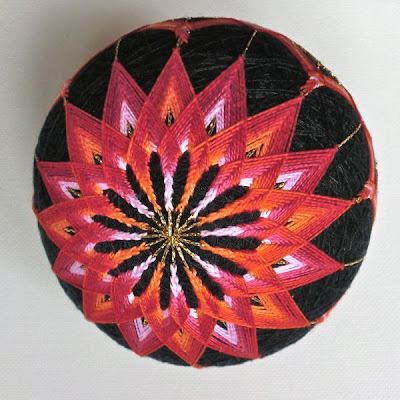 First I stitched with colors going from light in the center to dark at the outside. On the other side I reversed the color order, although I still outlined with a dark color. 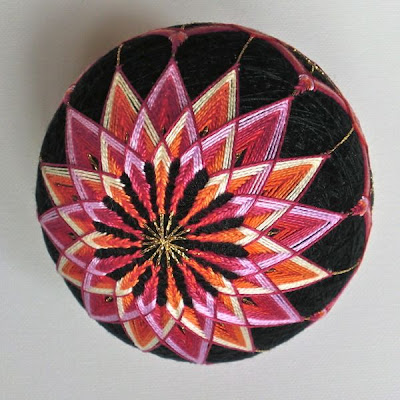 What different effects one can get with the same colors. It's one of the things that makes stitching temari fascinating. I had lots of space around the equator so I tried a more elaborate obi than I usually do. It uses the same colors and is two sets of kiku stitches overlapping at the equator. 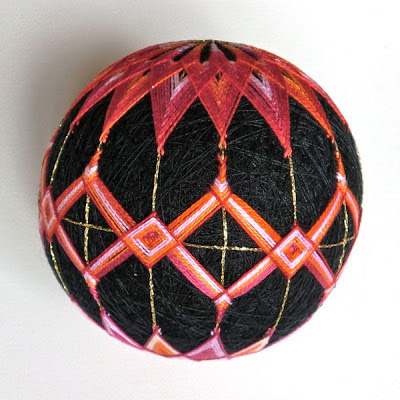 I like looking at these two balls together to see how much you can do with the same set of colors. 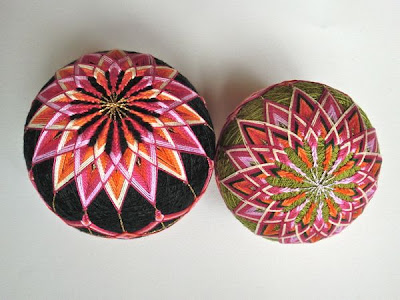