Walking in the cloud forest, one tends to look up to see the majestic trees—and the birds and monkeys. Looking down can be very rewarding as well. One can see interesting leaves that have fallen. 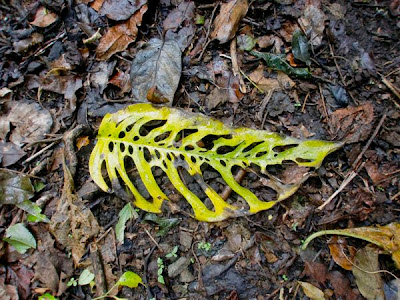 In the tropics,  most of the nutrients and energy are stored in the forest itself.   Fallen material recycles very quickly so the soil is thin and not rich. (That's why cutting down a tropical forest and trying to grow crops or pasture on it is not a sustainable idea.)
One might see flowers that fell from a vine at the top of the canopy, or perhaps a very large seed. 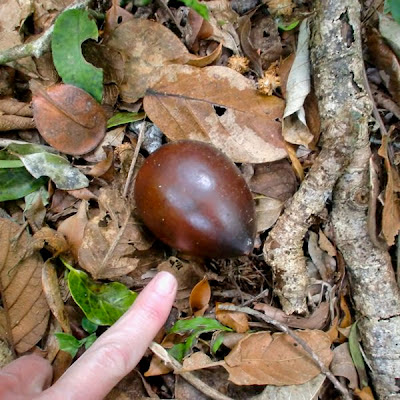 The most interesting category of fallen objects are bits of branch. Most branches in the cloud forest are loaded with epiphytes, or plants that use another plant as a support. They are not parasitic.  Over 400 species of orchids live in the Monteverde area and most are tiny and live high in trees. Intense winds cause many branches to break, creating orchid viewing possibilities without the bother and danger of tree climbing. This piece of branch is a miniature garden of several species, including orchids. 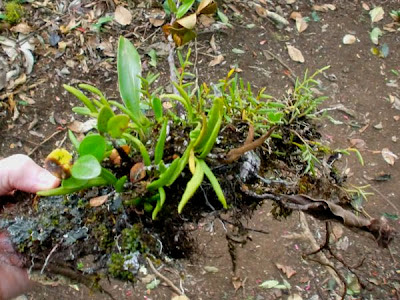 This fallen branch had one of the larger species of orchids found in the area. The flowers were about 1 inch/2.5 cm across. 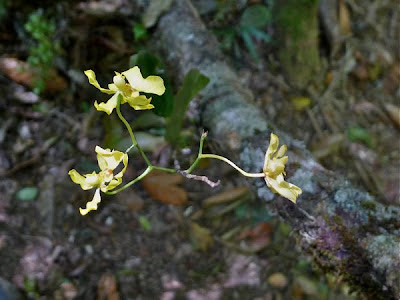 Posted by Carolina at 8:07 PM No comments:

Last week seemed to be the week for odd nature sightings. Consider the Long-Tailed Weasel (Mustela frenata) that ran up to my foot while I was sitting very still. Mark Wainwright's The Natural History of Costa Rican Mammals notes that "Mustelids see poorly, sometimes failing to notice motionless, quiet observers".  What seemed particularly odd to me was that I was sitting inside the library at UGA Costa Rica at the time. There's a lot of wildlife around the campus but I really didn't expect to expect to see an animal that Wainwright calls "shy and rarely seen" inside. Unfortunately it startled me so much that I moved my foot and it left before I had time to really look at it in detail much less take a photo. The plus side of that was it didn't run up my leg. By the way, the weasel is in the Mustelidae family, which includes skunks. Many mustelids have large scent glands. There was an extremely unpleasant musky odor in the library after the weasel left perhaps because it was just as startled as I was.
Another unusual sighting was a White-Throated Capuchin monkey that was traveling along at tree top level with its troupe of about twenty when it chose to jump to a branch that was just too small. I watched in shock as the branch broke and the monkey fell some 10 meters/over 30 feet. Since there was a lot of brush underneath I couldn't determine its fate but it was quite unsettling to watch it fall.
To end on an upbeat note, one strange sight of the week was merely amusing. This male Three-wattled Bellbird (Procnias tricarunculatus) had a momentary wattle problem. 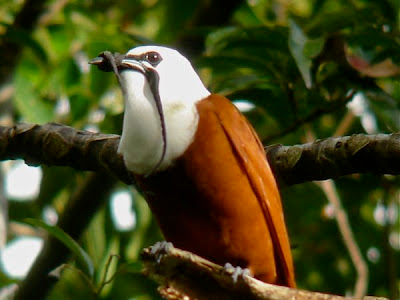 Fortunately he was very soon back to bonking freely. 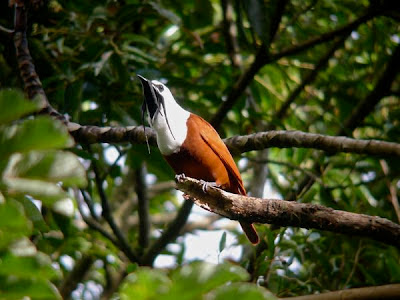 Recent sightings of the famous and not so famous

Most people coming to Monteverde want to see the Resplendent Quetzal (Pharomachrus mocinno). And who could get tired of seeing this emerald green and red trogon which is indeed resplendent? 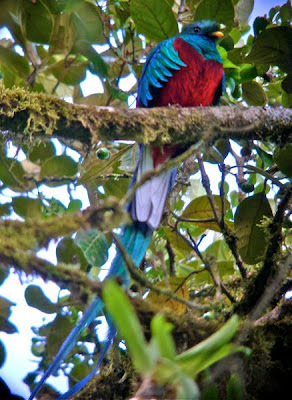 The long feathers over the tail can be up to 30"/76 cm longer than the squared-off tail itself. The best way to see a quetzal is to know where the fruiting wild avocado trees are. In this photo of a quetzal we saw this week, you can see a few of the small avocado fruits. They like to perch in or near such a tree for long periods of time. Once in a while they sally out to grab a fruit. They swallow the fruit whole and digest the thin layer of flesh before regurgitating the seed. Here is a picture of an unusually large wild avocado. Many are only half as long. 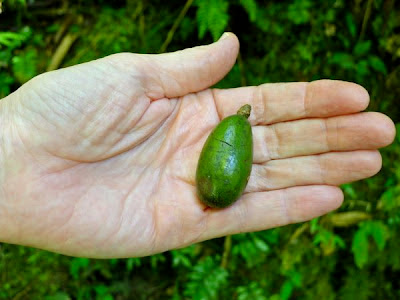 Another sought after bird is the Three-wattled Bellbird (Procnias tricarunculatus). Although the metallic call it makes can be heard for a kilometer, it's surprisingly difficult to see one even when you are so close the call is almost deafening. The males call from the tops of tall trees to attract females. (Apparently the females also find their long black wattles attractive.) It was a pleasant surprise this week to find a male calling from a perch on the UGA Costa Rica campus that was easy to see and photograph due to a path up the hillside from the base of the tree. Since Bellbirds tend to use the same perches through the mating season, we hope to see him again next week. 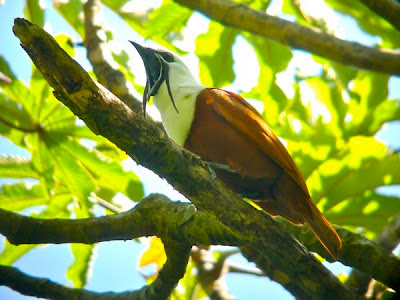 I don't get tired of seeing these beautiful birds whenever possible but I also enjoy seeing some of the less famous and flashy species of the area. It was fun to see the normally shy Green Hermit (Phaethornis guy) perching. This is a female.
Even rather unexceptional looking birds do interesting things. We recently found a group of Dusky-capped Flycatchers (Myiarchus tuberculifer) catching drone Azteca ants as they emerged and flew away from their host Cecropia trees. The flycatchers hovered briefly near the hole in the tree where the ants were coming out and grabbed them out of the air when they took flight. 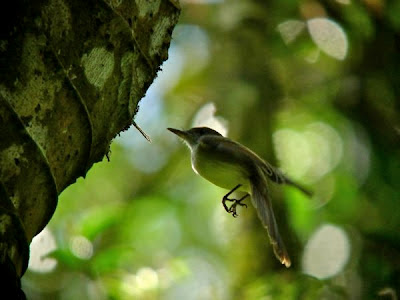 No matter how many times one goes in the cloud forest, there are new things to see. The entomologist we shared this sighting with said he had never seen the drones emerging and we would have never noticed it without seeing the birds' unusual behavior.