Our friend Dave Fallow expertly guides people to see birds in Madison. Due to concerns about climate change, he now only guides people that show up by bus or bicycle. It's a valid point: if one loves nature, it's a little strange to use a lot of fossil fuels to go appreciate it. He's not alone in this idea. I found an interesting site about it here. Many bird watchers are avid list makers and so that site's idea is to only count the birds spotted while self propelled.
The other day we struggled out of bed at what is our idea of early and biked across town to meet Dave at 9 am. It was a glorious day and we saw lots of birds that were migrating south, mostly beautiful small warblers. We also saw what looked like an offering to the wood spirits. 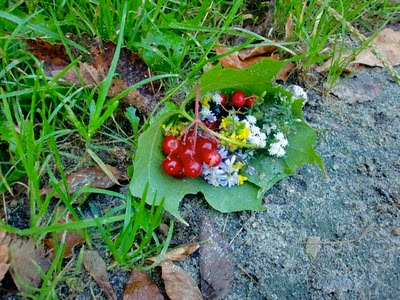 Enormous prairie flowers towered over us. 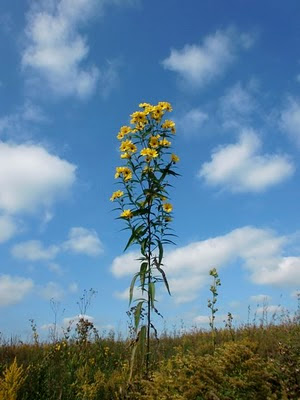 There were beautiful reflections in a marshy area. 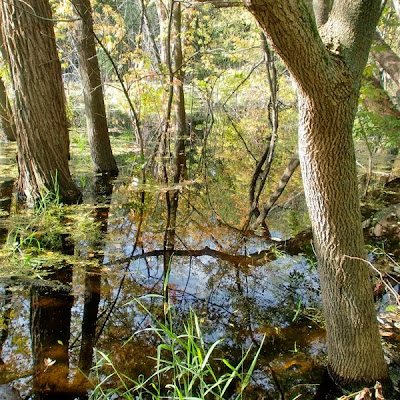 We're not serious about making lists and have no idea how many species of birds we've seen. A lot of cool ones. In the interests of full disclosure: we do carefully keep lists of what we have seen in the vicinity of our house in Wisconsin, in our yard in Costa Rica and in Costa Rica as a whole.  Somewhere we have lists of other trips that we've never bothered to combine into what is called a Life List.
It's very good to know there are so many interesting things to see close to home. Thanks Dave, for again showing us the wonders of Picnic Point.
Posted by Carolina at 11:24 AM No comments:

Autumn is suddenly just around the corner. Nights are cooler and the air is crisper. The corn fields are turning brown and all to soon only conifers will be green. We were out in the country the last couple of days; I feel a need to take advantage of the weather while it's nice. We rode our bikes on Short Cut road. It's a quicker way to get from the middle of nowhere to a different middle of nowhere. 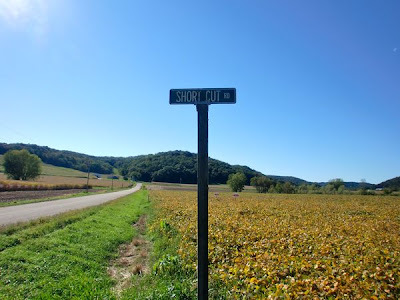 We saw a rare green barn. (In Wisconsin they are usually red or white.)
Hiking in the woods, where a few trees are already changing colors, we hunted for wild hickory nuts but the squirrels had already found most of them. 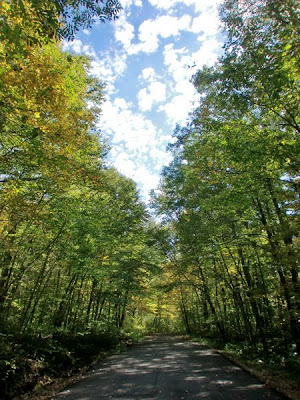 Summers always seem to go too fast but at least we have good knitting weather to look forward to.
Posted by Carolina at 6:26 PM 1 comment:

Way back when, when I was working crazy hours, I realized that time after time I got home too tired and too hungry to even decide what to cook. That's when I made my list of "5 Easy Pieces": dishes that took very little time to put together, yet we like to eat. (One of them was frozen pizza. This might give an idea of how little brain power I had left when I got home since I actually had to have this written on a reminder list. I just don't think well when I'm hungry. Another easy and fast dish was tempeh in coconut milk. The exoticism of that was balanced by macaroni and cheese out of the box which is one of Mr. Rududu's favorite foods in the entire world. )
I don't know where that list is anymore. Happily, I'm no longer so pressed for time. But I often throw dinner together at the last minute on busy days. In the late summer with wonderful tomatoes available, a great option is Insalata Caprese. 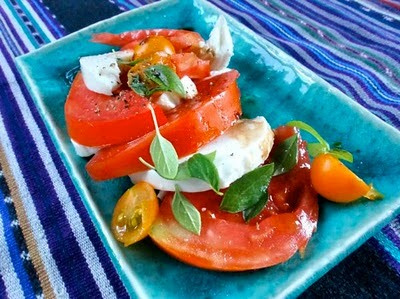 Get a really ripe and flavorful tomato. Slice it up and lay it on a plate with slices of fresh mozzarella cheese. Sprinkle on some basil leaves, salt, and pepper. Dress with olive oil and vinegar. Savor.
Posted by Carolina at 10:35 AM 1 comment:

I stand proud in my underpants

The commemorative edition of Elizabeth Zimmermann's Knitter's Almanac has just been published to celebrate the centenary of her birth. On page 94 is a color photo of my Nether Garment—my knitting in a book by my knitting hero!! 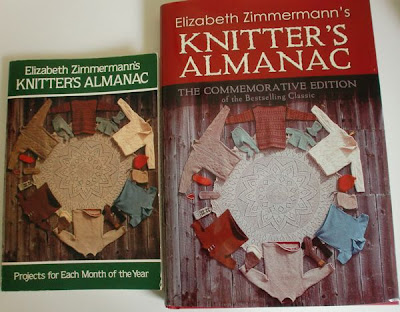 On the left is my treasured original copy vintage 1981 and on the right is the new edition with color photos. I am so proud to be included that words can't express it. Although I never met her, Elizabeth Zimmermann continues to be an inspiration to me in knitting and in life. One important thing I learned from her was that you can make any project truly your own and not be what she called a Blind Follower. 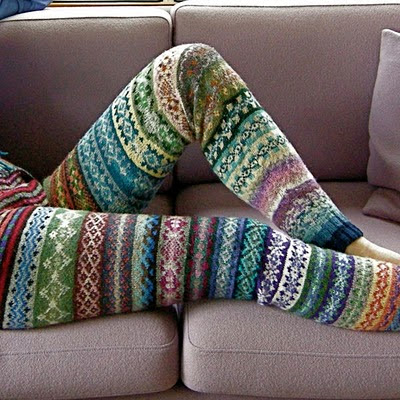 I knit my nether garment quite some time ago—I think it was the 90s or it might have been the tail end of the 80s. (Below are all the notes I have about how I did it. ) Until this year it had never been out of the house but it has now journeyed out and back in a box to be photographed for the book. I wear it often while sitting around on cold winter nights. Much as many people have advised me to wear it with boots and a skirt, I just don't do skirts in the winter, no matter what nether garment I have on. It gets really cold in Wisconsin! 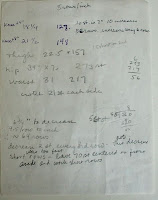 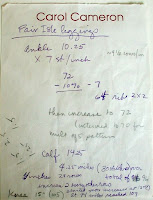 I never showed it to many people, but I noticed right away that when I did, they tended to giggle. It just seems to strike people's funny bones even though it was (ahem) a Serious Study of Fair Isle Colors and Patterns. Okay, it was actually more of a result of ordering scads of different colors of Shetland yarn from Schoolhouse Press and wanting to play with as many of them as possible. I sometimes consult it when thinking about what color combination to use for a new garment as it functions well as a sampler. And if I'm feeling a bit down, a quick frolic around the house in it is good for my mood.

When I posted it as one of my projects on Ravelry I was taken aback by it's popularity there and all the nice things people said to me. (One of the messages had the subject line "Your Underpants!" which I found charming once I realized it was from a non-native speaker of English.) It won a Bobby award for Most Colorful Project the first year of Ravelry. So far, over 23,000 people have looked at my version of the Nether Garment on Ravelry and now the book is out so I'm sure many others will see it. It makes me very happy and immensely proud to be part of the book. Knit on.
Posted by Carolina at 4:14 PM 6 comments:

I had a plan— to knit several pairs of just plain socks with the pretty yarn I had accumulated for the purpose. 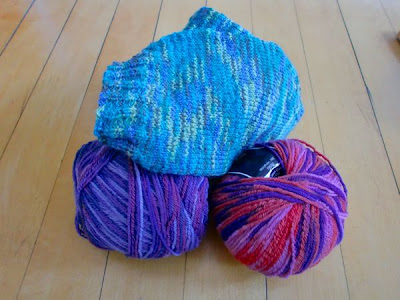 I was going to knit while watching TV. How very relaxing...mmm, how very boring. I started to think how I could easily be replaced by a sock knitting machine. Knitting projects need to fit sometimes unpredictable moods and this one was suddenly feeling like work.
So I plunged into the project set aside for when I could really concentrate. It turned out to be a lot easier than I had thought and way more interesting for me at the moment than plain socks. 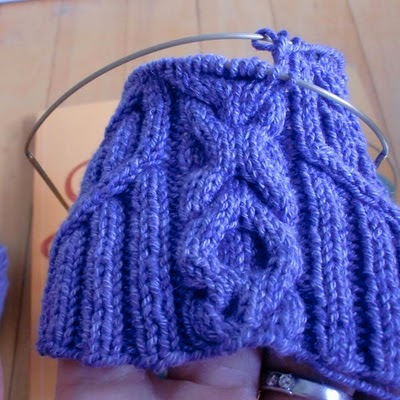 I'm in love with the X-O-X cable up the back of the sock. And I still have my just plain sock project on the needles for when it will be just what I feel like doing.
Details: my plain socks will be in various colorways of Soxx Appeal yarn. My cabled socks are following the Milo pattern in Sock Innovation by Cookie A. 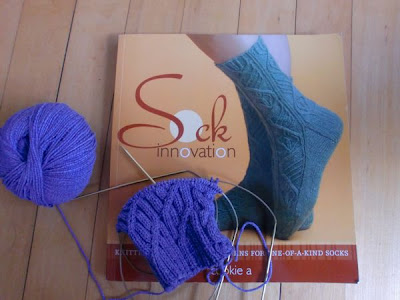 They are knit in Classic Elite Summer Sox yarn. My first attempt, on size 0 (2mm) is too small so I am now trying a larger needle. Those traveling cables really pull the sock in as it gets longer, making it much smaller than it seems at the beginning.
Posted by Carolina at 7:28 AM No comments: