Yep, we're back in Wisconsin. I'm so happy to see vast arrays of delicious cheese at local stores. 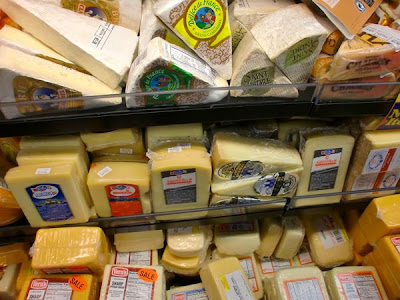 True, there's plenty of cheese in Monteverde, but none of the artisanal cheeses that we have in America's Dairyland. No imported cheese is available in Monteverde either. I'm reveling in the selection here. This isn't even the entire selection at our local coop. 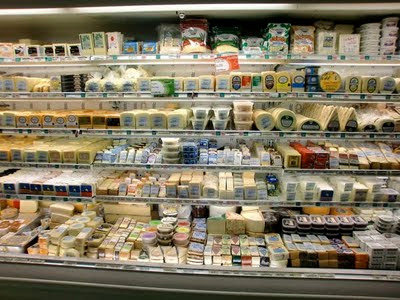 When we get some of this cheese together with locally grown tomatoes later in the summer, it will be even more heavenly. I saw these beauties in Tennessee on the way home. Most Wisconson gardeners haven't even planted tomatoes yet—it has been a very cool spring. 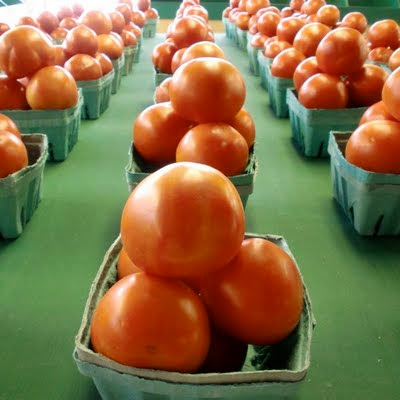 Waterwatching in a big way

The Georgia Aquarium in Atlanta is the world's biggest.  It contains a total of 8.5 million US gallons (31,000 m³) and the largest single tank in the world (6.3 million gallons or 24,000 m³). The smallest fish in the big tank is really big. The largest—whale sharks—are about 30 feet (10 meters) and growing. 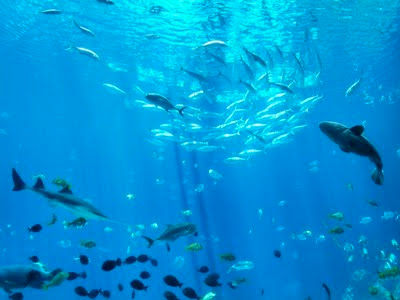 This week the aquarium might also have set the record for number of kids on school field trips. They were so excited that at times we wished we had earplugs. In spite of crowds and the sound level, we had a great time. (Our top tip for dealing with groups is to look at whatever is less crowded. Kids' groups move quickly and there are always lulls between groups so eventually we saw everything in reasonably calm surroundings.)
One of my favorite tanks held lots of jellyfish drifting about. 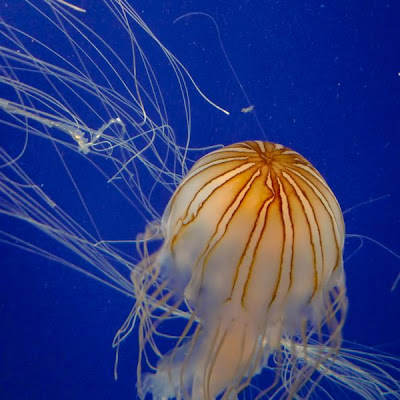 I also liked the colorful Brazilian river fish. I feel inspired to stitch a temari with these colors. I seemed most attracted to creatures with stripes and spots. 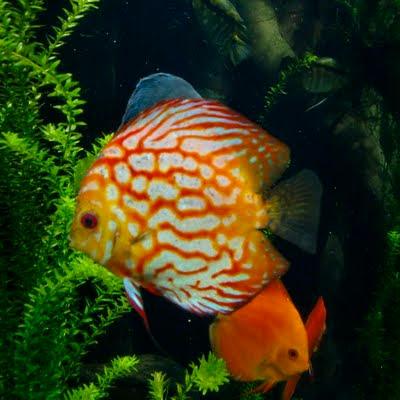 See what wonderful things you can do just with stripes and a limited palette! 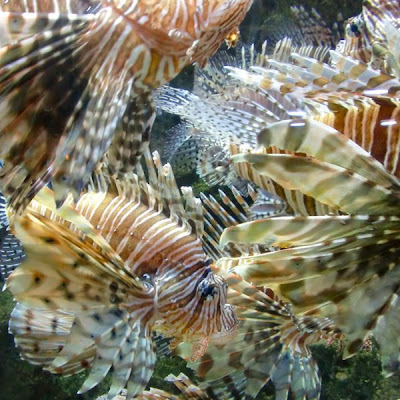 Posted by Carolina at 2:59 PM No comments:

Being continually moist, a cloud forest has many kinds of fungus. They are important in the breakdown and recycling of material such as fallen trees. Besides doing important work they are very interesting to look at. 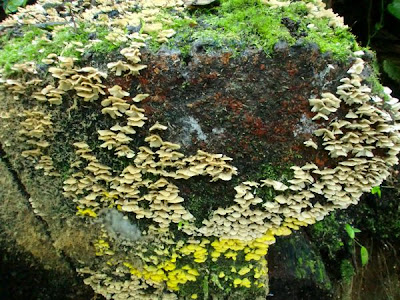 I liked the circular design of these shelf fungi. 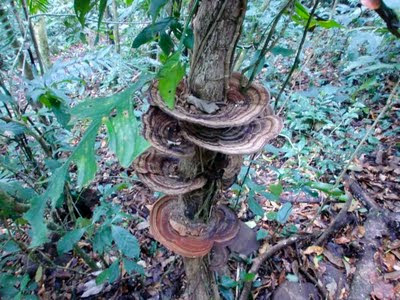 The fruiting bodies of most fungi are ephemeral, making a continually changing show in the cloud forest. 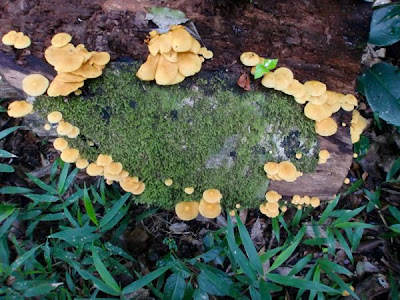 This one reminded me of an abstract painting. 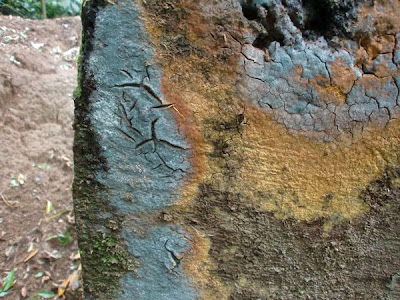 Someday I want to see some of the fungus that glows in the dark.
Posted by Carolina at 7:41 AM 3 comments:

While stitching temari in Costa Rica I came up with a pattern for a morpho butterfly. I have seen dozens of these giant blue butterflies in a single day, yet they always give me a thrill. 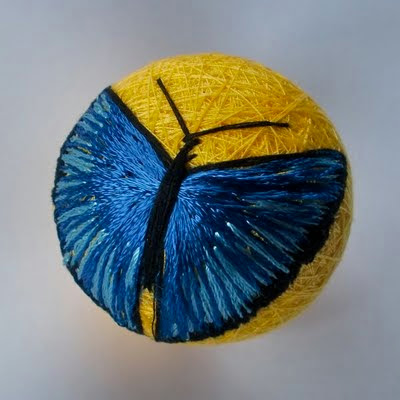 A lot of women in the Monteverde area do embroidery to sell to tourists and I've been getting some women in the San Luis valley going with temari. When making crafts to sell as souvenirs, the product has be done rather quickly, so teaching a complicated division of the ball was out. Although the local embroidery looks free-form, it's based on patterns transferred to fabric with carbon paper, which just doesn't work on a thread ball. So I came up with a paper template which is used to position pins at the corner of the wings. I stitch an outline around the pins and then fill in the wings and add a body with spindle stitch.
This is my first student, Daisy, with her first completed ball. She's holding up the side with a dragonfly on it, another motif I taught her. 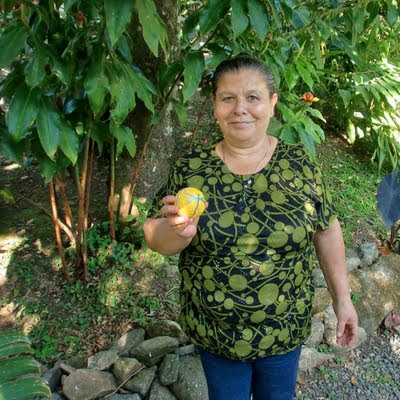 Here are some of her morphos in progress. 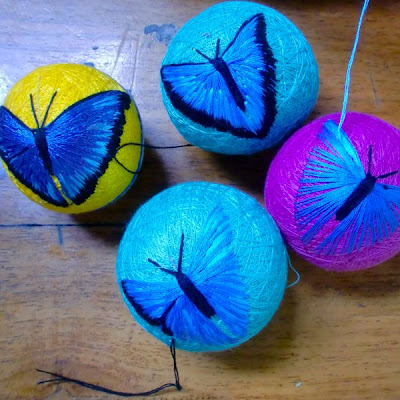 I also designed some little balls that I hope will sell to those on a tighter budget or with very limited luggage space. I tried a lot of different designs on these doodle balls but the mini-morpho is my favorite. It requires a very different style of template than the big version. 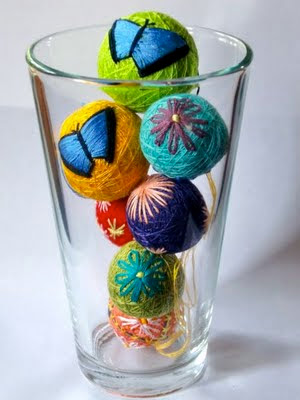 It will be very interested to see what Ticas do with temari.
Posted by Carolina at 2:34 PM 5 comments:

It's a wrap: quilt style temari

Last week I tried out a very different kind of temari, those in which many threads are wrapped around the ball instead of stitched on to it. Each hemisphere of the temari has the same pattern. 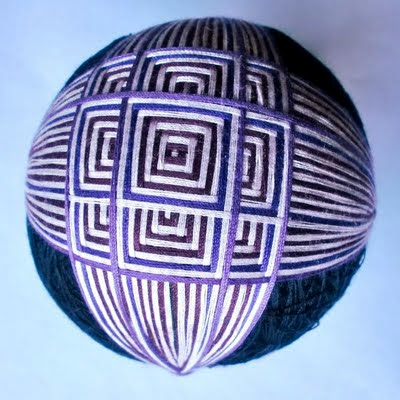 I found the patterns in the archives of the Temari Challenge group. The balls aren't as complicated to make as they look. They just need a simple 4 division. (That's the easiest division there is.) Because there isn't any stitching other than tacking down the end of a thread, I found them quite easy. For this pattern, a square and a cross was established by measuring along the division lines. Threads are wrapped alternately on the square and the cross and pass between keeper pins at the equator. Later the threads between the keeper pins are bundled securely by sewing around them.
Magically, a pattern builds up that looks like a quilt. (It might have been more magical and certainly would have developed more quickly if I had something other than sewing thread to work with; it was good I was fascinated by the progress because it took a long time.) I like the way it looks where all the threads are bundled together. The band around the middle is called the obi, like the belt on a kimono. 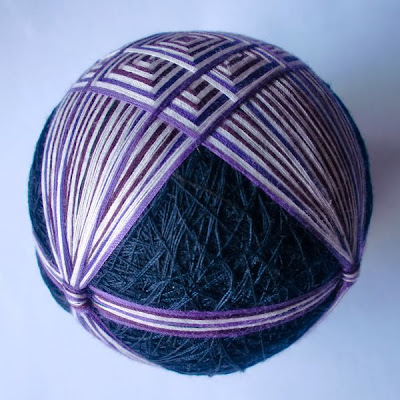 The second quilt temari I did also used a simple four division but those lines were divided ten times at a spacing of 1 cm. This is the largest temari I have made so far, having a circumference of about 30 cm. (12 inches). Even with my long fingers it was a bit hard to manipulate as I circumnavigated the sphere with thread. 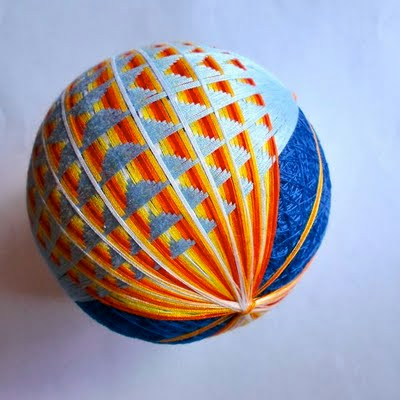 I made a little change compared to the pattern in that I because I got mixed up on where to place my first wraps. It was a fortuitous mistake though because I ended up with a bilaterally symmetrical pattern.
One thing I like about these temari is that sometimes it looks like they aren't round: from this angle it looks a bit squashed to me, but it really is a sphere. I plan to explore other patterns from the archive. 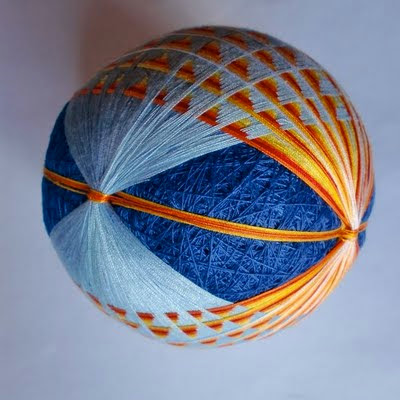 A multitude of small things

Sometimes small things distract us from birdwatching. On a recent day in San Luis we kept finding interesting little animals. Insects are more noticeable when they clump together. 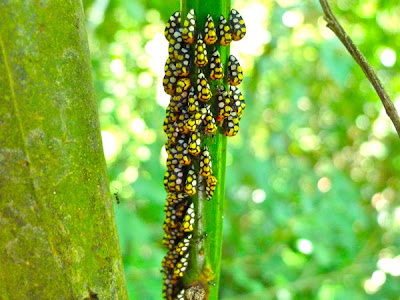 Each of these fascinating small creatures has a place in the ecology of the cloud forest; perhaps some of our favorite birds depend on them. Because of the vast number of insects in a cloud forest, each time we see a particular species it might be the first and last time we ever see it. (The number of insects species in Costa Rica is estimated to be about 365,000!)  Irridescent beetles are especially attractive, even when tiny. This one, found dead and missing an antenna, was collected and taken to join the study collection at the University of Georgia Costa Rica campus. 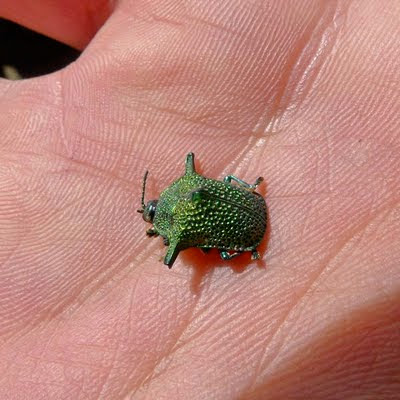 These insects made me want to use their colors in some knitting or other craft project. 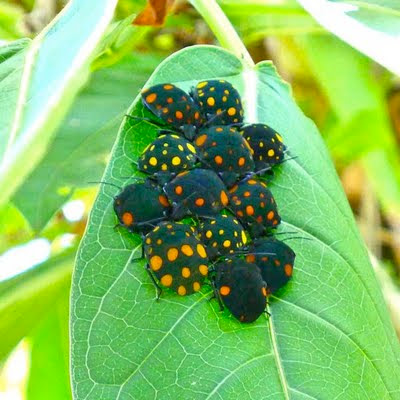 Tip for insect watching: if you stand back a bit and use your binoculars you might be able to see more details than if you just look at them. Most modern binoculars have excellent close-focusing. We also use our spotting scope to look at them.
This insect looks like it's had a paint job. 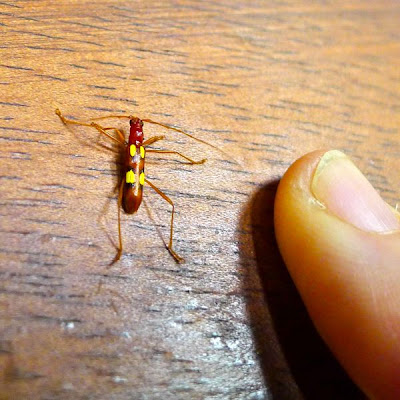 Even a toad, if small enough, is cute. 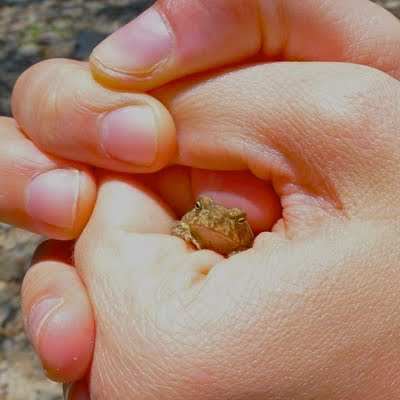 The lucky visitor sees the cloud forest when it's shrouded in clouds. A heavy mist in the air adds a hint of mystery and is necessary for a healthy cloud forest. This morning we had the total cloud forest experience, which means we got a little damp. 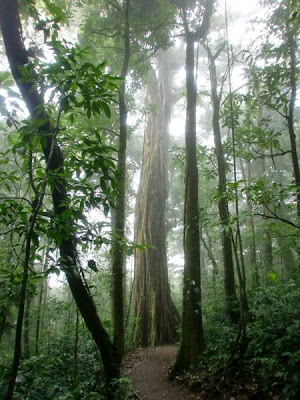 The Resplendent Quetzals started breeding late this year in the Monteverde Reserve but they are finally nesting. Nesting behavior makes it a whole lot easier to find them because they call quite a bit and they spend a lot of time sitting around waiting for their turn to attend to the nest. This morning, between bouts of mist so heavy you could call it rain, we saw at total of 6 quetzals and heard at least two others. One of the best sightings was from the hanging bridge where we watched a male only about 10 meters (30 feet) from us. Thankfully, all the viewers present were very quiet. Before Mr. Rududu's lens misted over, he got this fine photo, unusual because he wasn't shooting up at a sharp angle. 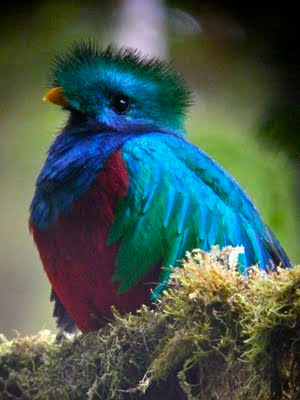 This is another male, sitting near a different nest. 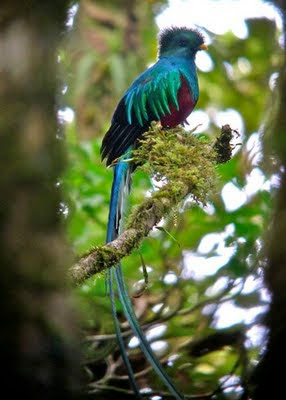 Tips for visiting the Monteverde Cloud Forest Reserve
The reserve is much cooler than it is at the beach. Unless you are very cold tolerant, most days you will feel more comfortable in long pants and shoes and socks rather than shorts and sandals. It can be misty or rainy. A very light poncho, or preferably a light wind breaker is a useful layer. I often take a light sweater too, but I'm a wimp about cool temperatures. Biting insects are uncommon; you can forget the bug spray completely in the dry season. The best way to see a quetzal (and lots of other interesting things) is to go with a guide.
Posted by Carolina at 3:54 PM 1 comment: