With one stroke of the needle

I love learning new techniques for stitching temari. Recently I've been working on hito hude gake in which an entire motif or series of motifs can be done with a single stitching path. (There is a good explanation of the technique in Temari Techniques by Barbara Suess.)
To create these balls I stitched kiku herringbone motifs in a spiral around the ball from the north pole to the south pole and back. Some of each motif is done on the way south and each motif is finished on the return trip. Traditionally one color is used going from the north and another going from the south to facilitate keeping track of where you are. I'm not crazy about the way that looks because I like things to be very symmetrical. Therefore on my first attempt, on a 27 cm circumference C10 ball, I used very similar colors and then I reversed which color went south and which color went north. This fools the eye so it's hard to notice differences between the stars. In this picture, it's the smaller ball. 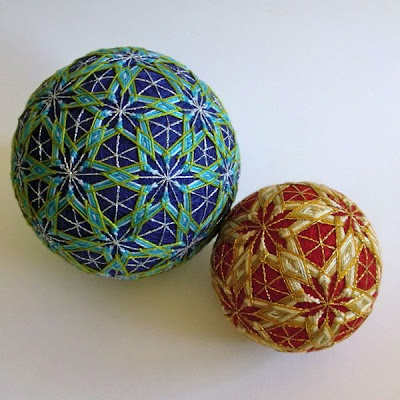 The second ball, with a circumference of  37 cm, is marked with 32 centers. Barbara suggests this pattern for multicenter balls that are less than perfect because it disguises the irregularities. My ball is a good proof of that concept as the marking was sort of wonky. For this ball I used the same colors in both directions. By having little papers with numbers pinned in each of the areas I could follow the path just fine.
Because this ball was quite time consuming to stitch, I tested a few different color combinations on partial stars by stitching a few rows and leaving the ends dangling so it was easy to take the threads out. This helped me decide to add more blue. Eventually I decided on outlining in green. 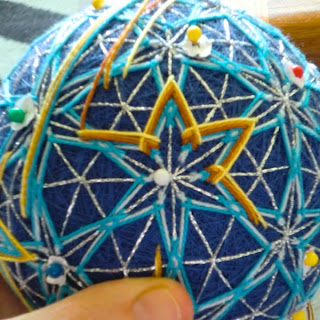