I hereby bestow my own architectural award for a new building in our neighborhood. It's a new Little Free Library that neighbors have put up in front of their house. (I've blogged before about these little libraries where you can leave a book and take another one in exchange.) This is the cutest little library I have seen, and given the competition in the cuteness category, that is saying a lot. 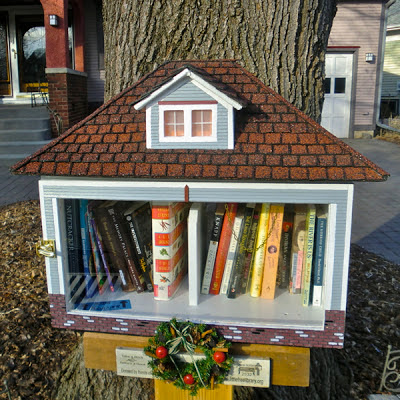 The attention to detail is wonderful. Someone cut little shingles and put bricks around the base below the to-scale siding. It has a dormer and well trimmed windows. However, the cutest thing about it is that it matches the owners' house, which is in the Marquette Bungalows Historic District. I also appreciate the added touch of a bench for library browsers. 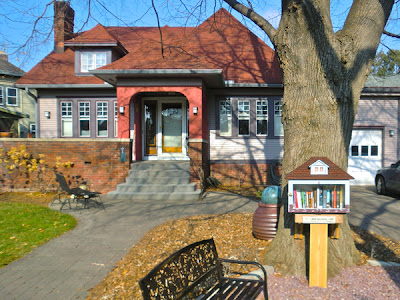 I've already become a regular patron of this library, which always seems to have at least one book I want to read.
Posted by Carolina at 11:41 AM 3 comments:

Email ThisBlogThis!Share to TwitterShare to FacebookShare to Pinterest
Labels: Madison

A notable feature of Islamic art is the use of geometric abstractions because of the avoidance of representational art, which is considered potentially idolatrous. At a caravanserai—a stone fortification where caravans stopped for a night along the Silk Road—we saw this wall carving. 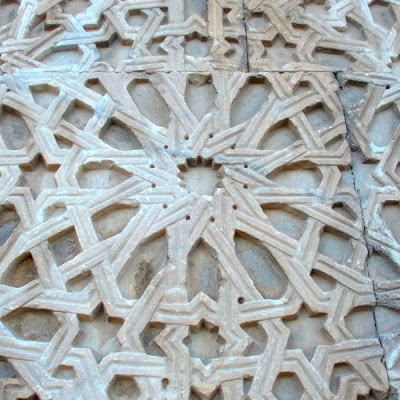 These kind of carvings reminded me of interlocking designs on some temari balls and I resolved to try stitching something using a lot of interlocking when I got home. My first attempt is this fairly large ball. (The pattern is 99DA05 by Debi Abolt on page six of the patterns on Temarikai.com.) 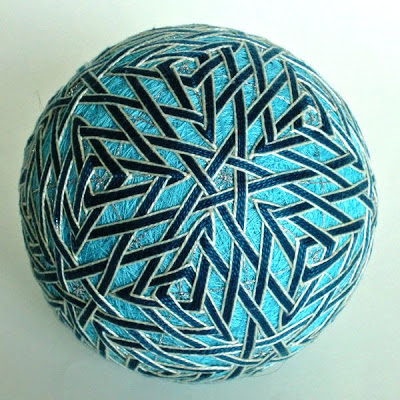 Notice the five pointed star. The first layer of the ball, with the stars more obvious, looks like the photo below. To complete the ball, interlocking tri-wings are added to each of the twenty hexagons. By the way, Mr. Rududu assures me that those hexagons cannot be regular because of the way they are formed by the 20 overlapping large triangles. 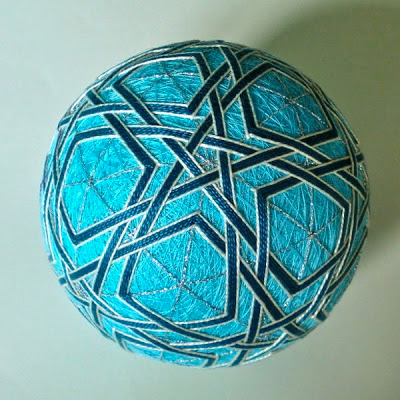 I found it very difficult to know how to interlock the pattern. It was particularly hard to know which way to go when only some of the threads were laid down. Trial and error isn't an attractive option so I made a little strip of paper as a template indicating where to go one way and where to go the other as a I added a new thread. I only pinned it to take the photo; normally I just held it up to the side of a triangle to check what to do. 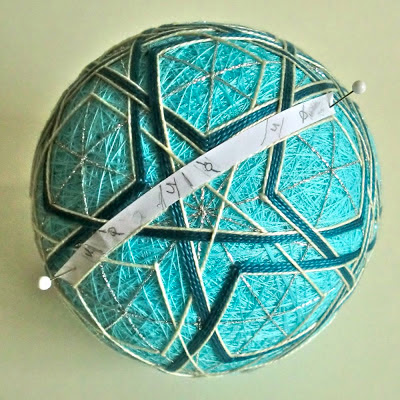 Meanwhile, Mr. Rududu was exploring overs and unders with mizuhiki, a kind of paper cord from Japan. He made a bunch of lovely knotted pendants. The ones in the top center and lower right of the photo are based on a pendant we purchased in Turkey.  The two left-most knots on the bottom are flattened Turk's head knots from The Ashley Book of Knots (copyright 1944). The top right pendant is a Japanese knot. The top left pendant is a knot that Mr. Rududu invented. 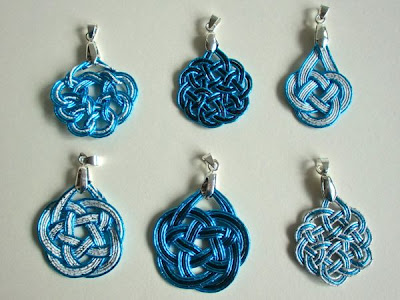