They were all singing 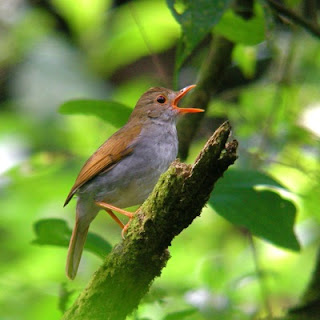 Seeing any bird in a dense tropical forest is challenging. Seeing one while it's singing is usually about 10 times as hard. Taking a photo of one singing is many times harder than that. So that's part of the reason we love this photo. It's an Orange-billed Nightingale Thrush and lives near our house. Knowing bird sounds or at least being aware of them means we see many more birds than we used to. And it's just kind of cool to know they are there even if one doesn't always see them.


We took the bus up to the Monteverde Cloud Forest reserve yesterday afternoon. It's actually walkable from our house, but it's a long way and at the end of the dry season (aka summer) the road is very dusty. Here's the bus to paradise. Costs about a buck to get there from our house. The afternoon was warm but with some mist and eventually rain. 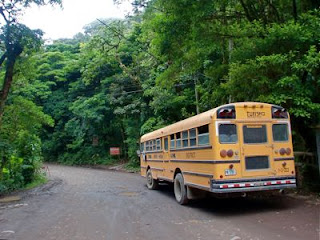 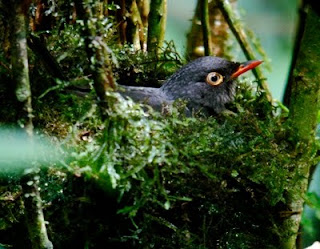 The magical part of the afternoon was how many birds were singing. As a Costa Rican told me, they are calling for rain. A more scientific explanation is that many birds breed at the beginning of the rainy season which starts in May and are now establishing their territories or trying to attract mates. Yesterday was the first day this year I heard one of my favorite songs--that of the Slaty-backed Nightingale Thrush. On our very first visit to Monteverde in June, 1991, we tried fruitlessly to find the bird that was singing such a beautiful song.  We've since seen the bird, but never singing. Here's a picture of it on the nest.
Hear a Black-faced Solitaire with a Bellbird in the background.

(Note: these pictures were not all taken yesterday. Getting good photos of birds requires lots of time and patience. And luck. All bird photos in my blog unless otherwise noted are the copyrighted property of Russ Kumai and may not be used without permission. Thanks Russ!) 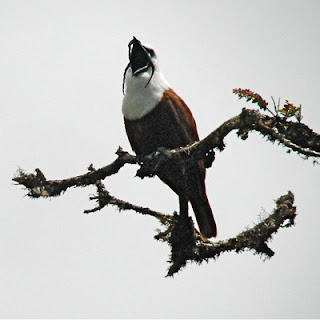 A bird that has been "singing" since early March is the Three-wattled Bellbird. Part of its "song" is an extremely loud metallic bong that can be hear for over a kilometer. They sing from the top of trees, which makes them very hard to find, but we are familiar with some perches in the reserve and saw one yesterday. There seemed to be three different males trying to attract females. All the males do is look pretty, sing loud, and contribute genetic material. The female chooses which male to mate with and does all the work of raising the family. Apparently female bellbirds find the long dangling wattles very sexy.

Another bird we heard a lot was the Black Guan. When it flies, it makes a loud machine-gun rattle with its wings. Hear it fly. 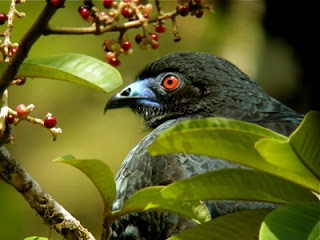 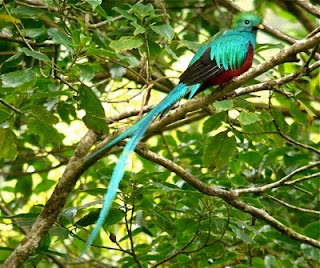 The most famous bird in the reserve is the Resplendent Quetzal. We didn't see any yesterday, but we know they were there because we heard some singing. Hear the Quetzal.


To cap off a perfect afternoon, we saw a Highland Tinamou crossing the path. They are reported to be fairly common in the reserve, but are so secretive that it has been several years since we last saw one.
If you would like to listen to bird songs, Cornell University has a wonderful free resource. It's at http://macaulaylibrary.org/index.do  You will need to have Quicktime and download the free RavenView program.
Posted by Carolina at 10:56 AM

Well, this is certainly a respledent blog - terrific pictures and fun words...plus the awesome leggings of the author. Thanks so much for letting me know about it.

I think you should band one of the orioles to see if it flies to Picnic Point...